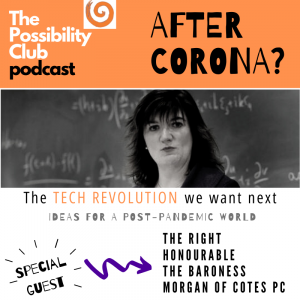 In a wide conversation at the end of January 2021, we spoke to our special guest, The Baroness Morgan of Cotes about politics and policy, technology, data and accountability in the post-Brexit world.

Before being appointed to the House of Lords, Lady Morgan was MP for Loughborough between 2010 and 2019 – and a senior member of Conservative-led government for most of the 2010s, mainly under David Cameron and Boris Johnson’s premierships. Positions held include Economic and Financial Secretary to the Treasury, Secretary of State for Education, Minister for Women and Equalities and Secretary of State for Culture, Media & Sport.

With experience as a former solicitor and corporate lawyer, Lady Morgan was a prominent Remain campaigner during the Brexit debate and describes herself as a One Nation Conservative.

But with a short window to chat in January 2021, we wanted to explore current thinking on data and big tech, following a speech exactly a year before in which she declared that the UK should be unashamedly pro-tech.

What does that mean and what are the risks? And has that changed since the world’s digital transformation has so unexpectedly accelerated?

The Possibility Club · After Corona? – NICKY MORGAN ON DIGITAL FUTURES

Use this link to SUBSCRIBE on your favourite platforms.

For more information on how you can get involved with The Possibility Club – an inclusive community of professionals working out what’s next, have a look here > www.thepossibilityclub.org

You can also receive Finding Chances, a free weekly letter from Richard Freeman, looking behind-the-scenes at business, culture, community and education by signing-up at findingchances.substack.com/

We’d love to know what you think of this podcast. Please review and share your responses to this podcast on your favourite podcast platform.

This is an always possible podcast.

The interviewer was Richard Freeman for always possible and the producer was Chris Thorpe-Tracey for Lo Fi Arts.