ABCD Igniter is a series of online events, free to attend for people working in the creative industries in Greater Brighton. The events will provoke ideas, suggest new ways of working, and invite you to re-energise collaborations.

Part of The ABCD Plan for Cultural Recovery in Greater Brighton.

Read more about the events 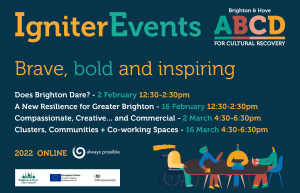 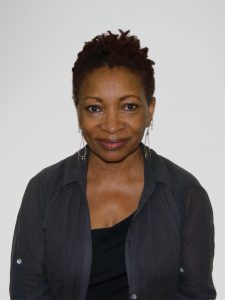 An accomplished writer, Bonnie’s novels and plays have been read and performed throughout the world. Dealing with themes including living as a woman and living as part of minority cultural groups, her works have captivated audiences from all backgrounds and addressed the real challenges faced by individuals in day to day life. Often inspired by current affairs, her appearance on BBC Question Time at the same time as the British National Party’s Nick Griffin in 2009 compelled her to write Yes, which was first performed at the Royal Opera House in 2011 and also prompted debate on a national level.

Bonnie’s recent book Langston Hughes: the Value of Contradiction explores the life of the famous civil rights campaigner. A columnist for the Guardian and for the Observer, Greer has appeared as a panellist and guest on a number of television and radio shows, including the BBCs Newsnight Review.

The recipient of an OBE in 2010 for her contribution to the arts, Greer has also been awarded the Verity Bargate Award for Best New Play by the Soho Theatre and a number of other accolades.

In April 2005, she was appointed to the British Museum’s Board of Trustees and completed two full terms, later serving as a Deputy Chairman. In 2013 Bonnie was appointed the Chancellor of Kingston University. 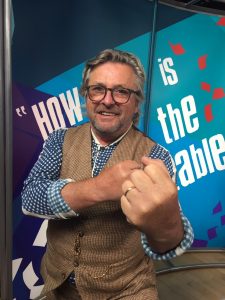 Michael opened his first business, a fashion boutique, at the tender age of 17; expanding to open outlets across Kent. After selling the business he launched Kent’s first wine bar, and later opened his own auction house.

Michael became a Bargain Hunt expert when four of the earliest shows visited his auction rooms to sell contestant’s items. The producer liked his style and he was offered a position. After screen testing for “Flog It!” for the BBC, Michael decided against presenting in favour of his business. His style made him a choice for his own show – the BBC series Auction Man. Hogben currently appears on the ITV 1 show Dickinson’s Real Deal.

Michael has had three books published: A-Z of Antiques and Auctions, 101 Antiques of the Future, and Collecting Under the Radar. 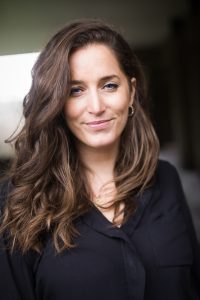 Alex Barker leads Be More Pirate; a book turned consultancy and social movement which supports people to challenge the status quo in their life and work.

She is a coach, facilitator and speaker, the author of How to be More Pirate, and producer/host of the Be More Pirate podcast.

Alex is based in London, and was previously a communications manager at the RSA (Royal Society of Arts). 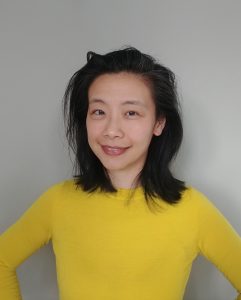 Dr. Cissie Fu is Dean of the Faculty of Culture + Community and Co-Founder of the Political Arts Initiative, which invites 21st-century imag-e-nations of the political though digital technology and the creative and performing arts. Born in Hong Kong, she has studied, taught, organised, curated, and performed across cultural and educational institutions in Asia, Europe, the UK, and the Americas. Her research interests sit at the nexus of political theory, participatory aesthetics, and artistic activism. 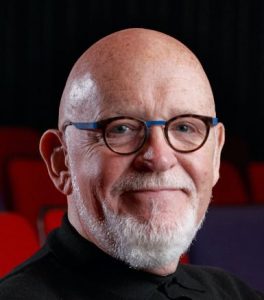 Dave Moutrey is Director and Chief Executive of HOME a purpose built multi art form venue that opened in May 2015. In this role he conceived and led both the merger of Cornerhouse and Library Theatre Company and the £25m capital project to create HOME which has attracted almost 1m visits per year since it opened.

He is seconded to Manchester City Council in a part time role of Director of Culture. He is responsible for advising the Council on policy and strategy for culture. 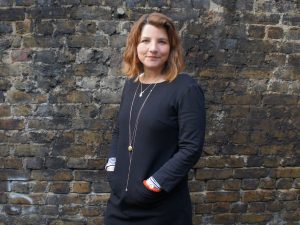 Emily Berwyn is the founder and Director of the pioneering social enterprise and advisory organisation Meanwhile Space.
She grew up in Brighton and holds an MA in Urban Design.

Emily is a project designer for programmes that utilise vacant space to support community initiatives, social and creative entrepreneurialism, and facilitate periods of positive change. As a Hastings resident, Emily supports local initiatives as a trustee of the charities Meanwhile Foundation and Leisure & Learning, and as a project board member on the Hastings Observer Building development. 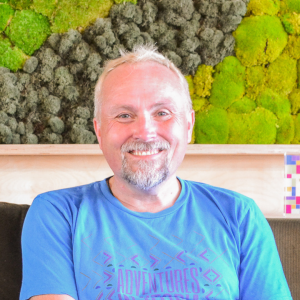 Paul’s journey began when his band Heavy Load (a punk outfit, partly made up of adults with disabilities) needed help making sure their fans had support to attend their gigs and stay until the end. Paul now runs one of the most disruptive and successful charitable projects offering fantastic social opportunities to those who want and deserve a more ‘rock n roll’ life style! 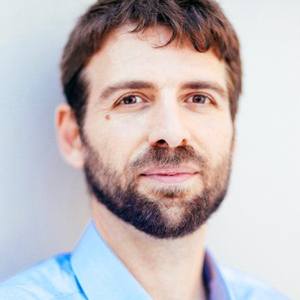 Lefteris is a an experienced designer, educator and podcaster.

His passion is creating brands that are well connected to their values, educating students that have deep rooted abilities and skills to handle change and talking about the real issues in design and design education. 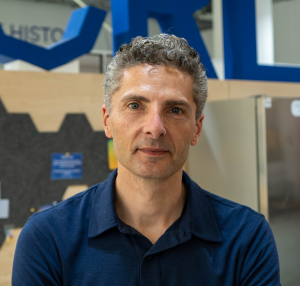 Mat Hunter is Co-Founder and Co-CEO of Plus X, a growing network of UK based innovation hubs. A designer by training, Mat started his career more than 25 years ago in Silicon Valley, working for pioneering innovation consultancy IDEO.

After 15 years of consulting globally, Mat spent 5 years as Chief Design Officer at the Design Council, advising UK Government and developing innovation challenge programmes for pressing public policy issues. It was through these innovation programmes that Mat started to fund and mentor startups, which ultimately led to co-founding Plus X. 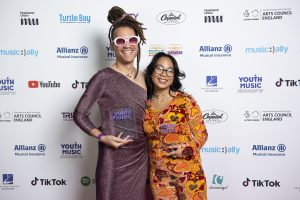 Co-founded a youth-activist group at 18, spoke on panels at The Great Escape, DJed to sold out crowds of 3000+ people and toured Europe before breaking into his own as a solo artist; Nelson Navarro has a joyous spirit shining through his irresistible cocktail of R&B and trap music.
Nelson’s appearances so far include supporting artists like Dizraeli, Bevan, & Brighton’s own Kymara with his unique live band ‘NVRRO5’ – bringing together talented musicians to fuse live jazz with electronic rap. Expect an infectious party wherever they land their cosmic spaceship-cum-soundsystem… 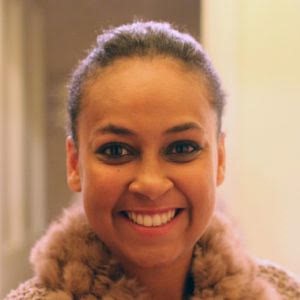 UK based designer and disability advocate Jessica Ryan-Ndegwa was born and raised in London. She has a Bachelor of Arts degree in Product and Furniture Design and is a business owner whose mission it is to champion for a more inclusive society. Recently, Jessica was selected as a Creative Freelance Champion to help drive systemic change within the creative industries. 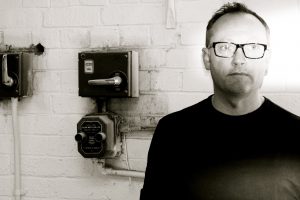 Richard Ainsworth established Rodhus in 2011, Rodhus studios provide workspace for creatives. It houses over 30 makers, designers and artists here at the Brighton site. They range from photographers, through to woodworkers, sound designers, screen printers, musicians, fashion and product designers a hackspace and more besides.

Wana Udobang is a multi-disciplinary storyteller working at the intersection of writing, poetry, performance. As a poet, she has three studio albums – Dirty Laundry, In memory of forgetting and Transcendence – which interrogate memory, familial bonds, healing and joy.

She has been commissioned by Edinburgh International Festival, Deutsches Museum and ThankYou Australia. She has performed her work across Africa, Europe and North America. She is a 2021 University of IOWA International writing residency fellow.

She runs The Comfort Food poetry workshop which uses memories around food as a conduit to create poems that become recipes for joy.

Her writings have appeared on the BBC, Aljazeera, The Guardian, Observer and CNN. Wana curates Culture Diaries; an archival project which uses multi-platform storytelling to document African artists. 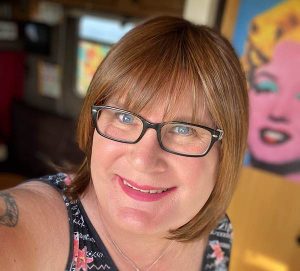 Sophie Cook became the first transgender woman to work in football’s Premier League as club photographer for AFC Bournemouth and was also Europe’s first trans TV newscaster. In the 2017 General Election she contested the East Worthing & Shoreham seat, increasing the Labour vote by 114% and narrowly missing out on becoming the UK’s first trans MP.

Sophie’s autobiography ‘Not Today: How I Chose Life’ which charts her personal journey from despair to redemption and acts as a self help book for anyone struggling with their mental health and identity is out now. 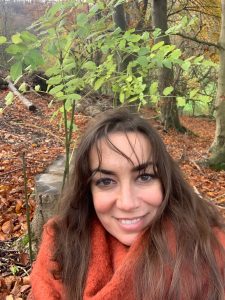 Helen is responsible for the programming of events at The Old Market, a unique independent arts venue in Brighton, founded by the creators of the global percussive phenomenon STOMP.

Helen is responsible for the festival-like programme at TOM, the cornerstone of their identity. The venue showcases over 200 different events every year from live music, film, boundary breaking theatre, dance, cabaret, comedy, literature and workshops.

They support, nurture, and enable growth to emerging talent, supporting the future of the arts through their Gig for a Gig scheme. 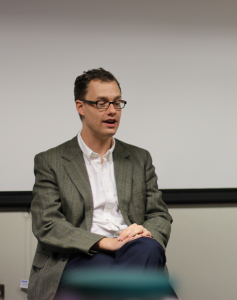 Josh’s research focuses on the intersection between entrepreneurship, skills and innovation, with particular reference to the role of creative industries and creative skills in the economy.

Josh was lead author on the PEC’s Creative Radar: Exploring the UK’s Creative Microclusters report, which has been widely recognised for highlighting the contribution of the UK’s smaller creative clusters. His research on the economic benefits of the ‘fusion’ of creative and technology skills has been cited worldwide, including in parliamentary proceedings in multiple countries and in the World Economic Forum. His research has featured in publications including Forbes, HR Magazine and Arts Professional.

VIEW ALL EVENTS AND BOOK

These online events are free to attend for those who work in the creative industries within the Greater Brighton area.

The ABCD Recovery Plan runs until the end of 2022 and has so far raised over £350k for the cultural sector in the city. The Plan is overseen by an independent group of people formed of a Governance Group and a series of Working Groups. Its aim is to create paid work and professional opportunities for creative workers in the city, developing a more inclusive cultural offer and encouraging partnership work to strengthen the creative sector in the long term. Partners include Brighton & Hove City Council, Arts Council England, Brilliant Brighton Business Improvement District, the Pebble Trust and many funded arts organisations in the city.

If you work in the creative industries and want to find out more and get involved visit www.cultureinourcity.com.

As a member of the Engine Room working group for the Cultural Recovery plan I’m thrilled to see this event series take flight. Creative workers and cultural organisations of all scales have had to adapt in precarious circumstances. These Igniter events will exchange ideas and draw inspiration, as well as peer-led development from thought leaders, innovators and entrepreneurs locally and from across the world to catalyse new ways of working, renewed resilience and energy into 2022.

As part of the ABCD Cultural Recovery Programme, the Igniter event series reimagines how the creative sector can emerge from the pandemic stronger, more connected and more resilient. Brand new. Bold. Brave and Inspiring.